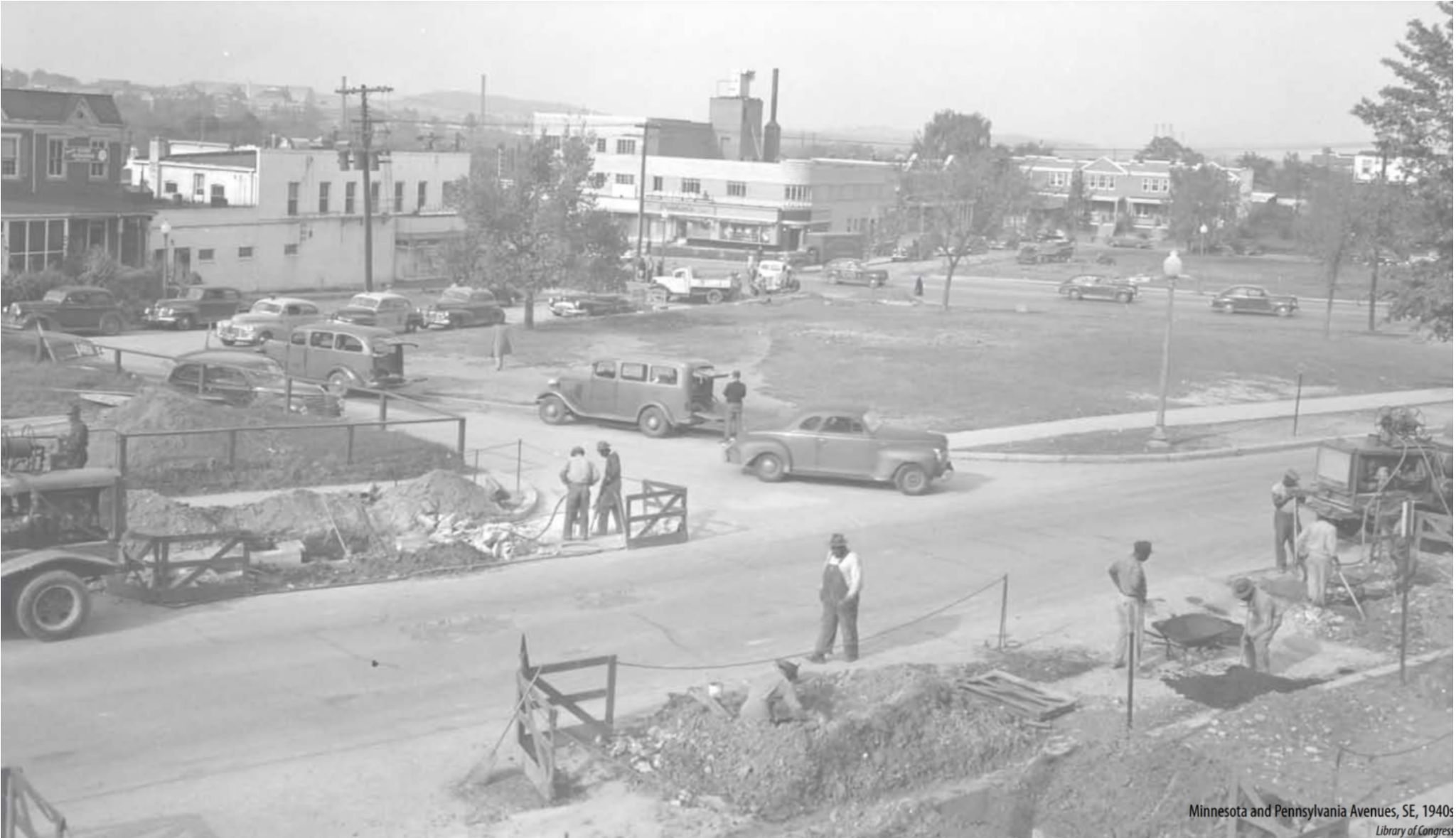 The Pennsylvania Avenue East corridor has several cultural resources that are not widely acknowledged. Underrecognized stories and resources are especially vulnerable as Ward 7 undergoes development. Organizations like the DC Historic Preservation Office work with community partners to promote, preserve, and reuse the Ward’s significant historic resources.

Do you know the earliest residents of Ward 7? Meet the Nacotchtank indigeneous people who fished, hunted, and traded along the banks of the Eastern Branch River. As part of colonization, Europeans claimed the land and gradually began to settle the area eventually forcing the local Native American population from their traditional hunting and fishing camps. The new settlers immediately set about cultivating tobacco, a cash crop for nearly two centuries, particularly for adjacent Prince George’s County, Maryland.

The Anacostia River was the earliest route to Bladensburg, founded in 1742 as a tobacco port. A road from Bladensburg, known as Eastern Branch Road, was carved through the ward to a port on the Potomac River called Piscataway, in Maryland. This road is roughly Minnesota Avenue today. Maryland formally transferred its ownership to land within the district on December 19, 1791.

In the period between the establishment of the District of Columbia and the Civil War much of the area was characterized by large landholdings and small-scale agriculture in which some property owners kept enslaved workers. In 1855, for example, Thomas Talbert, whose farm was near what is today Alabama and Pennsylvania Avenues SE, had nine enslaved Africans.

The Civil War brought increased development in the form of forts and a growing population. The forts are now part of the Fort Circle Park system and are recreational sites enjoyed by District residents.

The current Sousa Bridge has been around since 1938. Previously, a bridge quite near this location was first established in 1804, but that and a subsequent version both burned. The neighborhood really shifted from agricultural land to more suburban and urban development with the advent of the influential Pennsylvania Bridge (1890-1939), connecting Pennsylvania Avenue to the former Washington County.

New interest sparked in real estate east of the river and away from downtown. A new hotel named the Overlook Inn in East Washington Heights offered views of the river, city, and country. The hotel was located near 31st and Pennsylvania Avenue. To access the area, a new street railway was proposed in 1894 to link the B&O railroad through Twinning to the Eastern Branch.

The “Southeast White House” (also: “Little White House”) at 2901/2109 Pennsylvania Ave was built in 1910 by the architect William Plager. This “white house of the east” was written about in the newspapers of the time and became a popular site along the corridor. It has become a long-standing landmark and an example of classical-style architecture.

The residential apartments on 2925 Pennsylvania Ave SE were designed by Mihran Mesrobian. This architect is famous for being the primary in-house architect for Washington developer Harry Wardman. These apartments are not currently listed on the National Register of Historic Places, in contrast to a number of Mesrobian’s other buildings in the DC area.

There is a sizable cluster of homes and commercial buildings designed by Lewis Giles in the west end of the Pennsylvania Avenue study area. Giles was a prolific African American architect based out of DC.  More information on him is posted on the Historic Preservation Office website here.

Development of streetcar suburbs in the southeast section of Ward 7, especially along Pennsylvania and Minnesota Avenues, began in the late nineteenth century attracting middle-class whites. These included Kenilworth, Randle Heights, and, later, Hillcrest; many resembled sister neighborhoods west of the river that also grew along the streetcar lines. Accompanying these subdivisions were stately churches, later automobile-oriented shopping centers, and other standout commercial buildings. Multi-family housing was also developed for white renters during the war and post-war period, including complexes such as Naylor Gardens and Fairfax Village.

After the desegregation of Washington’s public schools hastened by the Ward 7 school case that was bundled with Brown v. Board of Education, the complexion of Ward 7 changed rapidly. White flight in the southeastern sections of the ward resulted in the replacement of middle-class whites with middle-class blacks who still reside in the “Silver Coast” which includes neighborhoods like Hillcrest, Penn Branch, and Benning Ridge.

DCist: Ten Facts You May Not Know About Hillcrest by Cordilia James on December 26, 2019.

Have an idea? If you think there is some essential history or context that truly represents the neighborhood and should be shown here, please use our suggestion form to add your ideas, and optionally to be contacted when we meet to revise this page content.